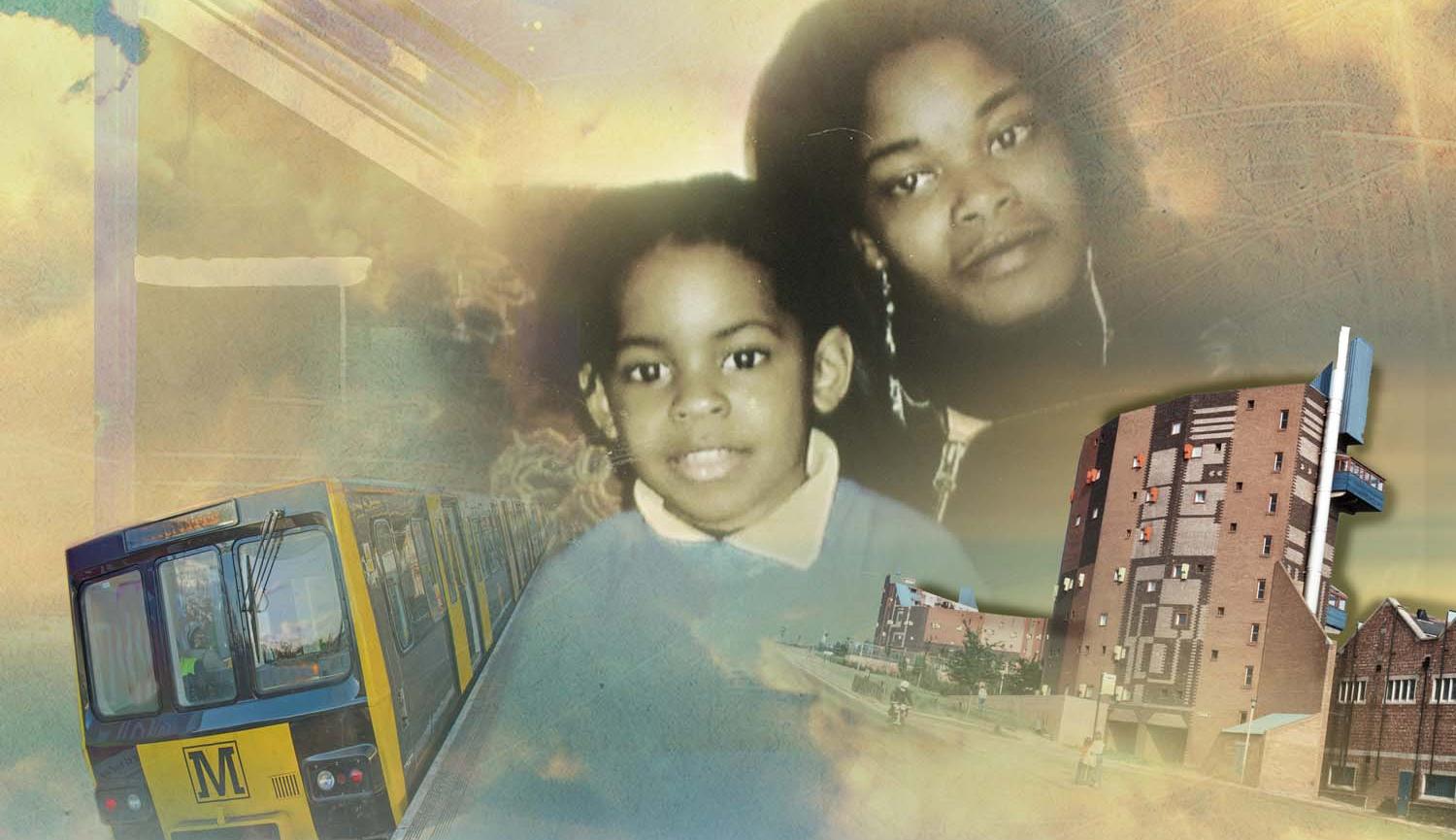 From The Sky To Your Hands

The true story of a young mum's search for refuge and belonging.

“I tell him that you don’t know what I have been through…for us to be here. You have to work hard. Nothing comes from the sky to your hands…”

Joana came to Newcastle with her baby son Osvaldo from Angola in 2003. In 2008 Joana took part in From Home To Newcastle, a Live Theatre verbatim piece about asylum seekers and refugees. Almost ten years later this new play catches up with Joana – how have things changed for her and her family, including Osvaldo, now a typical Geordie teenager?

Performed by Joana herself alongside actors from Live’s Youth Theatre, From The Sky To Your Hands tells, in their own words and with music and humour, a story of parenthood, longing and belonging.

The play will feature a mixture of traditional songs and original music composed by award-winning composer Mariam Rezaei.

Part of the Freedom City Festival celebrating the 50th anniversary of the award of an honorary doctorate by Newcastle University to Martin Luther King the show touches on festival themes of racism, poverty and freedom.

Following the performance of From The Sky To Your Hands production listen to the writer, Juliana Mensah, Director Paul James and some of the cast including Joana Geronimo on whose true story the play is based along with representatives from charities that work with refugees in the region, discuss bringing the play to the stage and the issues raised.

From The Sky To Your Hands - A Word from the Director, Paul James

From The Sky To Your Hands is an exciting piece of verbatim Theatre which charts the journey of Joana Geronimo and her baby son, Osvaldo, arriving to Newcastle from Angola as refugees in 2003. I first talked to Joana about the possibility of doing the show in Nov 2016 and after an extensive period of interviews, Juliana Mensah, the writer, was able to shape the material in to a script.

"From The Sky To Your Hands includes a talented and diverse group of young people who support the telling of Joana's story as the Chorus. They have been challenged emotionally and intellectually and have responded with great maturity to the material presented in the piece. For me, theatre, amongst other things, is about challenging prevailing orthodoxies and this show certainly does that."

Find out what Director Paul James had to say about the creation of From The Sky To Your Hands. 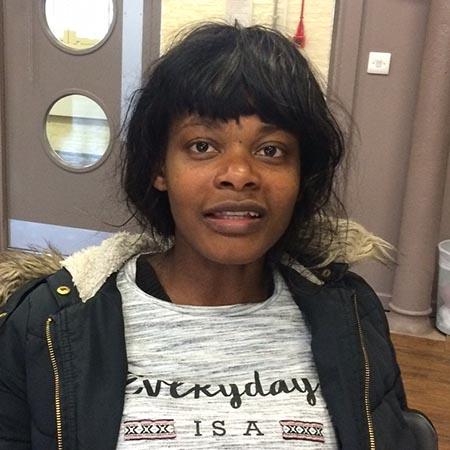 Joana Geronimo is an actor who was a member of Live Theatre's Youth Theatre for many years before becoming a Freelancer Drama Facilitator. In 2013 Joana embraced the opportunity to work with Open Clasp Theatre Company in the production The Space Between Us. Now, with this production, Joana hopes to touch the audience’s heart by sharing her personal story. 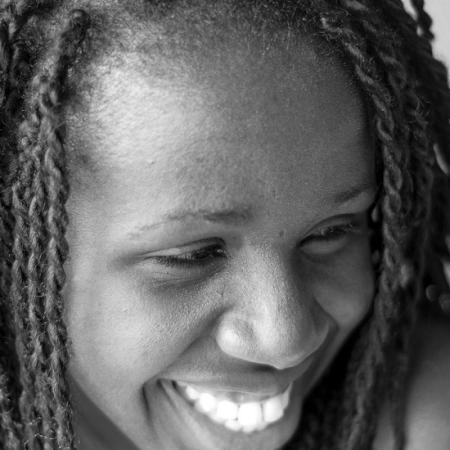 Juliana Mensah is a writer based in the North of England. In 2016 Juliana received a Northern Writers’ Award from New Writing North and the Arvon Foundation. She is an associate at the Centre for Applied Human Rights at the University of York, where she was its first Leverhulme Artist in Residence in 2013 and 2014.

Juliana’s work in theatre has had a focus on human rights narratives and the testimonies of survivors. Productions have included A Restless Place (Pilot Theatre) and Crow on the Cradle (Riding Lights Theatre). 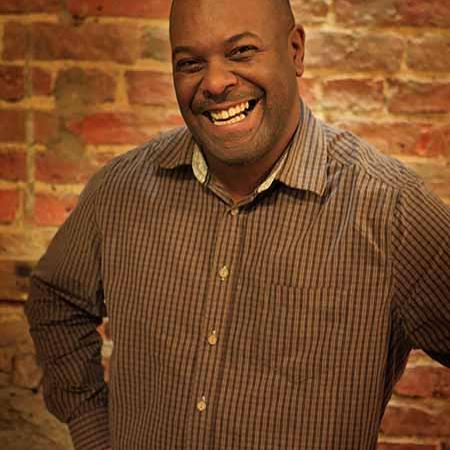 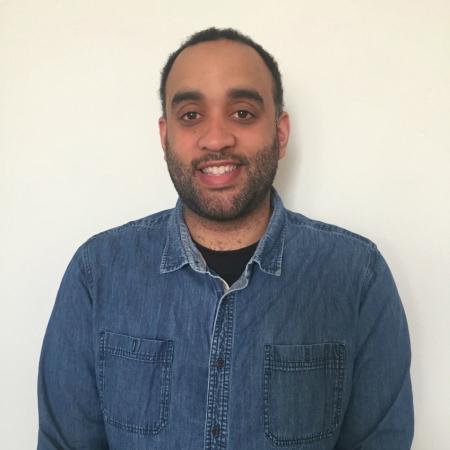 Michael Lockhart started his acting career when he was 16 at Live Theatre's Youth Theatre. Since then he has gained a degree in Acting and works as a professional actor in and around the North East. He has also set up his own company working with young people. Michael is excited to be working with Paul James again on such an inspiring show. 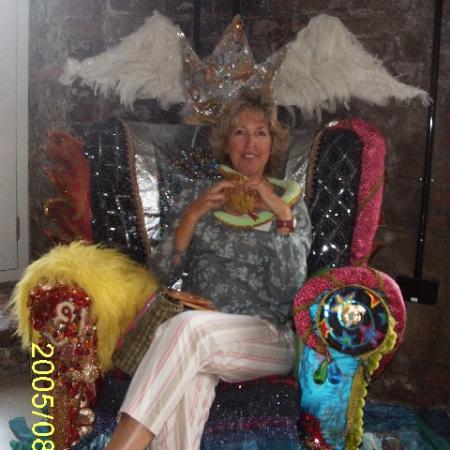 Alison gained a 1st class degree in theatre design and has since designed a wide range of productions for numerous theatre companies throughout the country. After learning her trade at the Birmingham Rep, RSC, Young Vic and Half Moon, London she was Associate Designer at the Royal Theatre Northampton where one of her favourite designs was for the lavish restoration comedy The Way of the World.

Since moving to Newcastle she has designed for Open Clasp Theatre Company and Theatre sans Frontiers. Alison most recently designed Harriet Martineau Dreams of Dancing, The Savage and Turning Pages at Live Theatre.

Mariam Rezaei is a multi-award winning composer, Director of The Old Police House, TOPH Collective and Composer in Residence at The Lit and Phil. She has just returned from performing at Glastonbury and is currently working on Daniel Bye's Instructions for A Border Crossing, David Almond's A Song for Ella Grey for Northern Stage and ZENDEH ‘PETRICHOR’, whilst directing Bradford Scratch Orchestra and The Old Police House Collective on several live film scores performed around the UK. 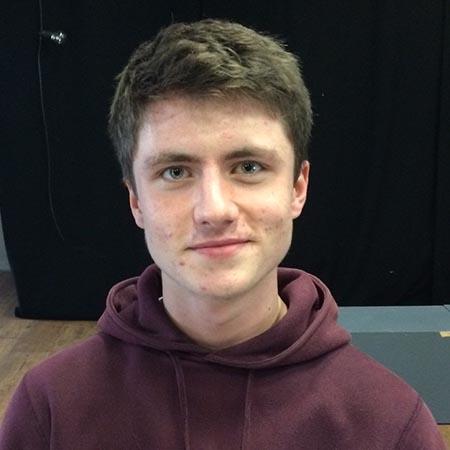 Finn Armstrong is Newcastle born and bred and is currently studying Performing Arts at Gateshead College. He’s a veteran on stage at Live Theatre and has been an active member of the Youth Theatre for 7 years. Finn's previous roles include a role in CBBC's The Dumping Ground, the artful dodger in Oliver!, roles in music videos and most recently a lead role in Gateshead College’s production of Earthquakes in London. Finn is excited to be a part of this production as the subject matter really interests him and he's looking forward to gaining experience in an unusual style of performance. 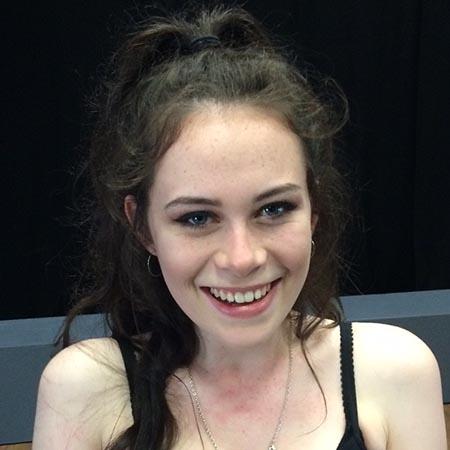 Isobel Donkin is 17 years old and has been part of Live Theatre's Youth Theatre for around 2 years now. She has been involved in a few performances that have explored the idea of a chorus in the past so she is incredibly excited to be revisiting the role within a chorus. She is looking forward to working with a new talented group of individuals and producing an impactful piece of theatre presented as part of the Martin Luther King festival! 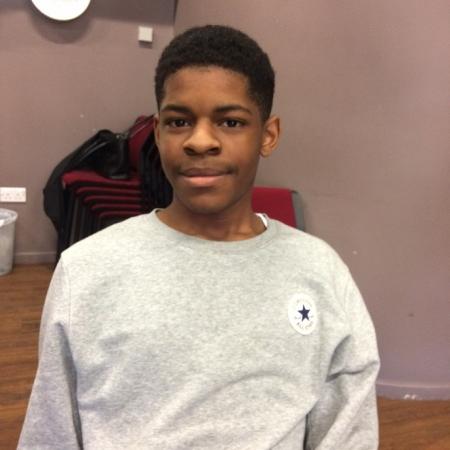 Geronimo is a young actor who has been part of Live Theatre's Youth Theatre for four years and is very excited about taking part in From the Sky to Your Hands. 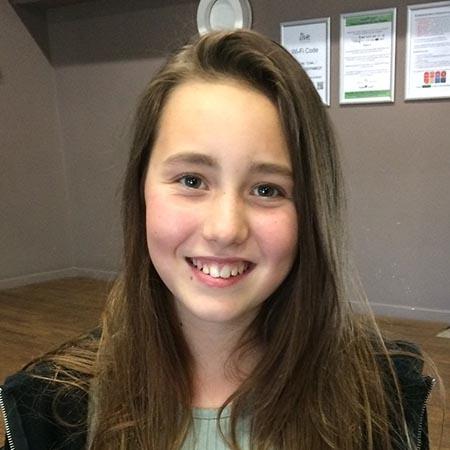 Elizabeth Guariento is 12 years old and loves acting, singing, dancing, netball and squash. So far she has been in one Live Theatre Youth Theatre show. She is looking forward to the experience of being involved in From The Sky to Your Hands - not just like the primary school Mary and Joseph performances - as well as the chance to meet new and interesting people. She is also keen to learn more about the experience of being a stranger in a new country. 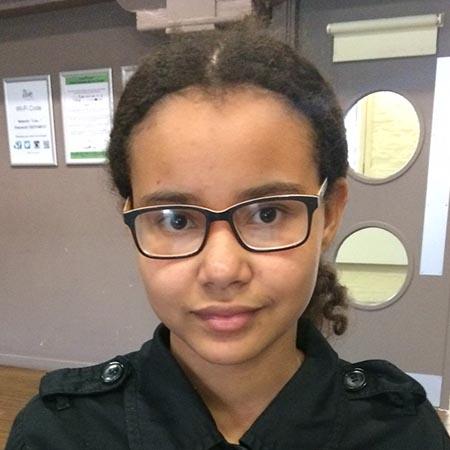 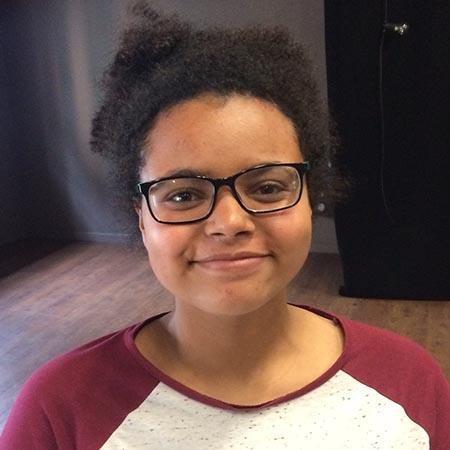 Wambui Hardcastle is a young writer and actor. She has been part of Live Theatre's Youth Theatre for four years, and is also a member of Live Theatre's Gben! playwriting course. She can't wait to work on From The Sky To Your Hands, but moreover can't wait for audiences to come see it. 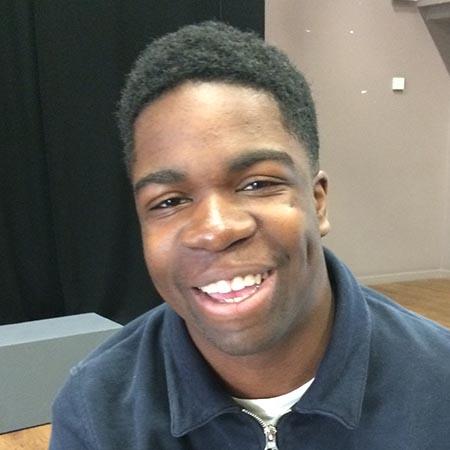 Ore, who begin his involvement with Live Theatre via the Gben! playwriting course, is ecstatic to be joining From The Sky To Your Hands as it is his debut performance in a Live Theatre production. While a newcomer at Live Theatre, Ore has performed for and is a part of the National Youth Theatre, he has written and performed his own play 27 - based on the ‘27 Club’ - and portrayed Banquo in Macbeth. 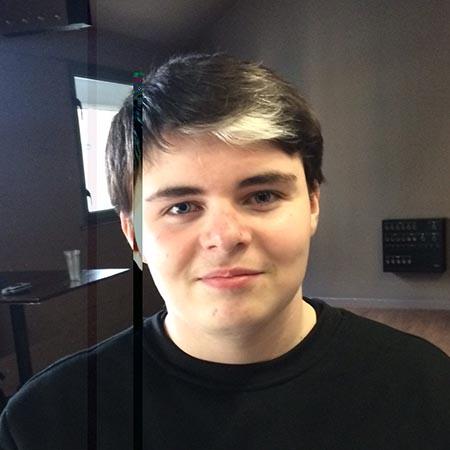 Kalem Patterson has been a member of Live Theatre’s Youth Theatre for 3 years. On two occasions he has taken part in the annual Youth Theatre Summer Festival and also played a lead role in Paddy Campbell's Day of the Flymo.

What he finds most interesting about From The Sky To Your Hands is how unique it is, he hasn't seen any other plays like this and as it was written by a new writer he is excited to see what he will be a part of.

Watch a video of From Home to Newcastle presented in 2008

In 2008 Live Theatre presented From Home to Newcastle, a play which shared the true stories of seven members of Live Theatre's Youth Theatre and captured their experiences of growing up in places as diverse as Angola, Iran, Sierra Leone, Zimbabwe and Tyneside as well as their hopes and aspirations for the future.  Now almost 10 years later From the Sky To Your Hands revisits the story of Joana Geronimo and explores how things have changed for her and her family, including her son Osvaldo, now a typical Geordie teenager.

Production Photos of From The Sky to Your Hands

Meet the Creative Team
THU 9 NOV (after 7.30pm show)
The writer, director and cast discuss bringing Joana’s story to the stage and issues raised in the play with Julian Prior Chief Executive of Action Foundation, and Dr Mohamed Nasreldin, Director of North of England Refugee Service, charities that work with refugees in the region
FREE, with ticket for that evening’s show
Suitable for Artsmark visits.

From The Sky To Your Hands